A Resevoir in February

In the Angling World winter is not usualy associated with resevoir fishing, rather it's Grayling on the rivers and large double figure trout on the small stilwaters. But Trawsfynydd is a treat as it is open for trout fishing on the bank from the 1st of February until the 31st of December, something many anglers are not aware of.

A phonecall from Stephen Roberts, member of this years Welsh International Spring Team, asking if I fancied fishing with him on the Saturday, neither of us were exited by the thought of potentialy being stuck in one corner of a small stillwater on a cold day, so when we remembered that Traws was open it was a no brainer!

Having not fished for trout for a while, I had a look through my fly box to see if I had any decent ones in tact from last season. And the method for the day I had in my mind was a di5 sinking line with a bright blooby (booby blob) on the dropper with a black booby on the point, figuring the fish would be deep as its February, a bright fly for recently stocked fish, and a dull booby for the older fish.

We arrived at the venue shortly before 10a.m and it was surprisingly mild, there was a note 'busy with boats' with a number to call. Within minutes Mitch arrived at the lodge to issue our permits and he gave us a heads up as to where we might bend our rods into a few trout.

Before searching round the 1200 acre venue, we had seen a good activity of trout on the surface in front of the caffe (so much for the fish being deep!), so we decided to give here a few casts. Only the week before a brilliant 13lb over wintered Rainbow Trout had been caught in this area 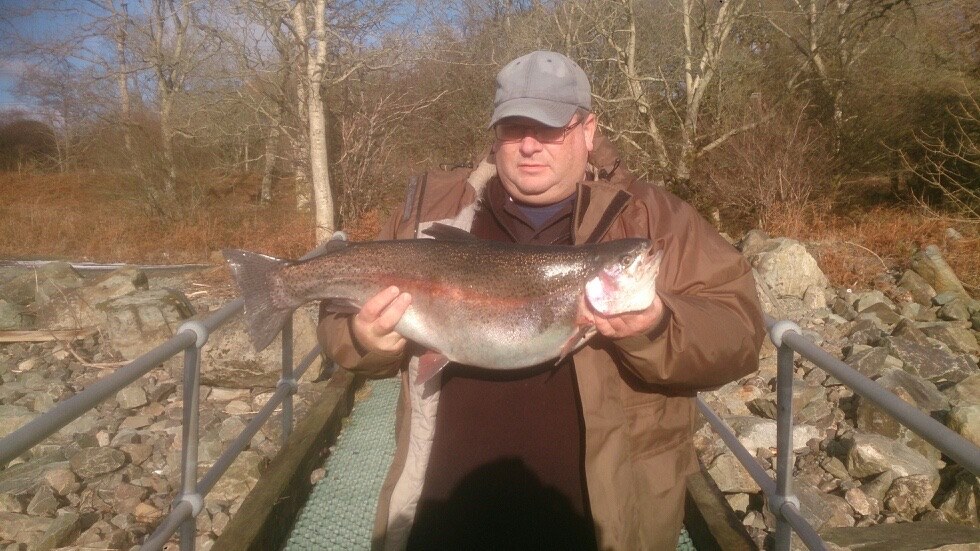 In hope of catching its hungry brother I chose a hot head damsel on a fast glass (sink rate of only 1.5 inches per seccond), while Stephen chose a two tone orange blob on the dropper with a black booby on the point, again on the fast glass line so he could keep the flies to the depth of the rising trout.

In no time Stephen was getting takes, and soon he was into his first resevoir trout of the season. We could tell that it was stocked this year, so we decided to stay in the area in hope others will come to the net.

Again Stephen was getting fish after his flies, my olive damsel hadn't tempted a regular size trout, never mind a 'Big 'Un', so I decided to follow suit and put a orange midget gem blob (5mm fritz, b160 size 12 hook) on the top dropper with a black booby on the point, spaced 6ft to each fly. 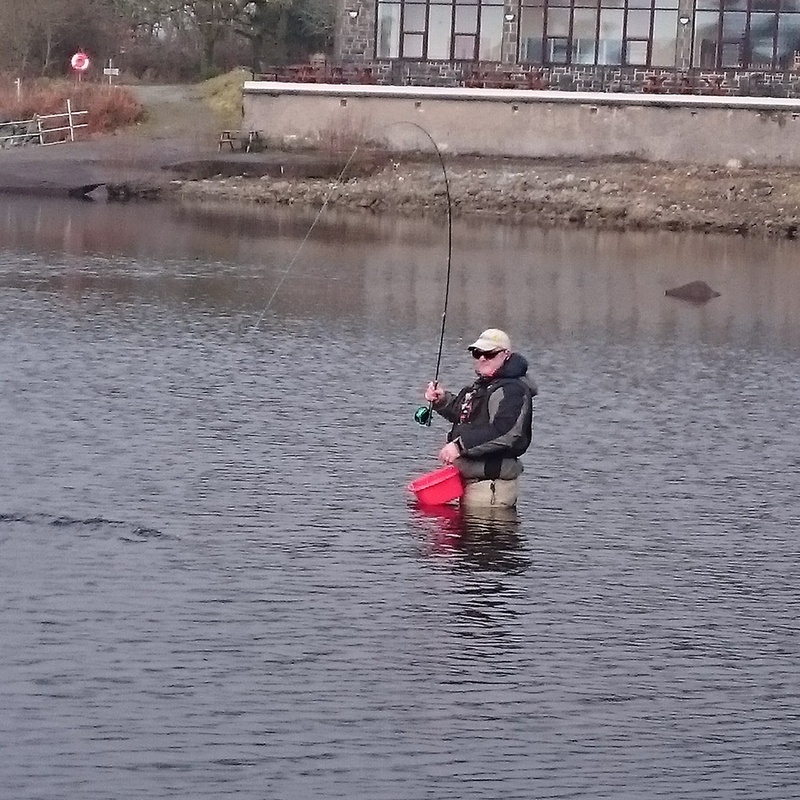 By the time he had worked his way down the bank he was into his 4th fish! Half were fully finned over wintered fish. 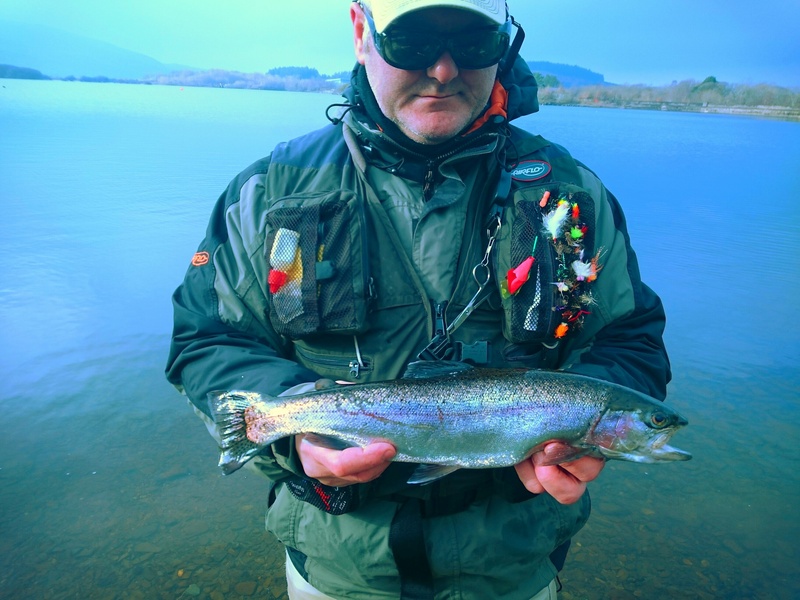 The fish seemed to be holding on the edge of the ripple, wading out combined with his longest casts followed by a slow figure of eight retrieve brought him success. Both flies had caught for him, even the blob caught an older trout!

What a great start to the day, in no time at all he had 4 fish and plenty of takes. Now it was time I had something!

I decided to go back to where we started, to the right of the caffe. There was no wind, but fish were surfacing. Halfway through my retrieve, with the line roughly 3-4ft under the surface the line locked up. The fish fought hard, making runs for the lake bed. When I finaly caught a glimps of it all I saw was a golden coloured trout, 'Its a Brownie!', when it finaly came to the net it turned out to be a Rainbow of about 2-3lbs, but its colour was very different to the rest which had been caught! 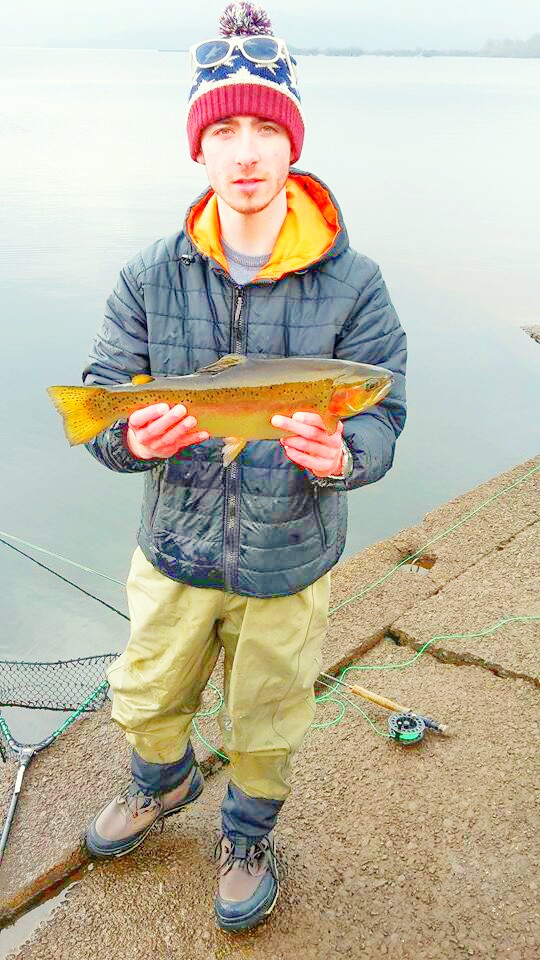 Once unhooked it swam back instantly, each fish had fought hard for their size. With my back turned to the water, Stephen shouted 'That was massive!' a 'Big 'Un' had just rose within casting distance, so I got my flies to the area, straight into a slow fig8 retrieve (no need for popping the flies as the flies were on the wake the fish had made and there was no wind) and instantly there was something boiling after my flies. I kept the retrieve at a constant, although tempted to speed it up, then once again the line locked up! Withing secconds the trout started to leap out the water, and it was obvious it wasn't the 'Big 'Un', but it fought realy hard! With a pipe in the water and the fish making a jet line for it I had to pull on it hard to stop it from wrapping my line around it. When it got closer to the net I could see it had taken the small blob, then hang on... theres another fish following it? I had a 'double header', no wonder it fought so hard, two fish on at the same time! Each time i went to net the first trout, the seccond trout would drag it away, which gave onlookers a good laugh! After a struggle I managed to net the first, then hand line the seccond into the net.

Not a bad morning, steven had landed 4 and I 3. We decided to change location, it was a toss between 'Cae Adda', a large rocky bay located on the South Easterly part of the venue, or the main dam the deepest point of the lake, located in the North East. Unfortunately we hadn't enough time to fish both areas as we needed to be away by 3:30pm, so we decided to head for Cae Adda.

Accessibility to here is fair, as you can drive there, with only a few minutes walk to the water.

Confident in our methods, we knew if we didn't get interest within a few casts the fish werent there, or were to far out. So we worked our way down by the boat house, nothing so far. Then we fished off a point where the wind blew into the bay, "if there is one place they will be it is here" we thought. Stephen's line kept tightening up at the same place, snagging weed or bottom possible? We called to head back to Home Bay for the last hour, so I casted out and reeled in, then it locked up! a Small Rainbow of around 3/4lb, most likely found its way into the lake from the cages a tad early. Could it have been Stephen was missing trout and not hooking the bottom? We gave it a few more casts but nothing came to the net. Cae Adda is a large bay, where the trout can be hard to find even by boat on occasions!

During the last hour in homebay we moved around more than in the morning, but the trout were taking in exactly the same areas as the before, with multiple rising in the middle of the bay.

Stephen managed a double header himself, but being without a net he lost one and landed the other. Still getting interest from the fish, we landed another one each and called it a day. And what a day it was, a mixture of fully finned over wintered trout, and stockies, Stephen ended on a great 7 trout landed, and I was happy with my 5. Whilst chatting to Malcom (Mitch's son who rears the fish on sight himself) Stephen said "Never have I had to look into my box as few as this in a day before", and he couldn't have been more right! Fast glass, a blob and a black booby, the fish simply wanted it!

We couldn't help but want to go on a boat to fish for those out of reach trout that day, but hopefully thats less than a month away if the weather permitts.

Traws is fortunately on my dorstep, last year was a fantastic season on this venue, and it looks like this year will be the same. Without a doubt we'll be back on the bank very soon, and I would reccomend it to anyone, your not forced to fish one place due to its size, the trout are good quality, and the views? Stunning!

Oops, you forgot something.

The words you entered did not match the given text. Please try again.

Reply Jamosprelo
3:25 AM on June 7, 2021
You actually revealed this well!
canada pharmacy
https://thegardenchurch.webs.com/apps/guestbook/

Reply Jamosprelo
1:45 PM on June 8, 2021
You expressed it really well!
https://theessayswriters.com/
how to write a concluding paragraph for an essay
https://service-essay.com/
essay writing help
https://ouressays.com/
why do we write essays
https://paperwritingservicestops.com/
how to write the best essay ever
https://safehands-doula.webs.com/apps/guestbook/

Reply Jamosprelo
5:47 PM on June 11, 2021
Amazing postings. Thanks a lot.
https://englishessayhelp.com/
how to do a college essay
https://essaypromaster.com/
how to write a personal essay for graduate school
https://topessayssites.com/
colleges that dont require essays
https://englishessayhelp.com/
writing a college admissions essay
https://mountainfire.webs.com/apps/guestbook/